Gear changes are a necessary part of motorcycling, for those of us who have not gone the way of the DCT or electric bike. Shifting gears efficiently allows riders to deliver the correct power output to the rear wheel when needed. This skill is essential to be able to keep that ever-crucial momentum needed to keep your motorcycle online.

Timing is critical to successful and smooth motorcycle gear changes. The clutch and throttle must be adjusted in unison to match the required gear change at the shifter. This can be difficult to master, but once you get the hang of it, smooth gear changes will become second nature.

Making gear changes incorrectly can lead to a jerky ride and can even cause the bike to stall. In this blog post, we’ll go through how to make smooth gear changes on an ADV bike by going over the fundamentals of clutch control and shifting technique, as well as some troubleshooting hints. Let’s get started!

Motorcycle riders should have a basic understanding of the clutch’s function in order to use it to its full potential. The amount of power delivered to the engine is regulated by the clutch. When we shift up or down a gear, we do so when the clutch lever is fully engaged or fully squeezed by our left hand. The smoother your shifting performance is, the more pleasurable your ride will be.

The internal elements of the clutch include a series of plates. When you hear about someone “burning out the clutch”, it actually means that the teeth or notches on these plates have been worn down over time. To simplify the clutch’s action and effect check out this chart:

The friction zone is the yellow region in the illustration above. The friction zone endpoints on each bike vary somewhat, but the exercises that follow will help you get to know it better. Mastering the friction zone begins with practicing clutch drills without throttle input. Let’s get into it.

The folks at TecknoMechanics put together this animated video showing the inner workings of a typical motorcycle clutch. If you want a deeper understanding of clutch function, then have a look.

Mastering the Friction Zone on your ADV bike

Get to know your friction zone with these drills:

Shifting is all about preparing the bike to be in the right gear for the right speed you are about to ride next. Gear changes affect your speed, control, and balance, so smoother is always better. Let’s look at the process of upshifting from a full stop.

With the bike engine on and in neutral, pull the clutch in with your left hand. Cover the front brake lever with one or two fingers. With your left foot, tap the shifter lever down into first gear. You should hear and feel the transmission click into gear.

Once you are on the move, upshifting will be needed to allow the bike to increase speed. When you are ready to shift up to the next gear, place your left foot under the shifter with slight upward tension on it. Next, roll off the throttle while pulling the clutch lever completely in. Quickly lift your left toes up to shift up through neutral and into 2nd gear. Slowly release the clutch while also rolling on the throttle to continue. This first upshift tends to be the most difficult shift to master because you have to travel through neutral in order to get into second gear.

If the bike does not move forward, then the bike is likely in neutral instead of second gear. Simply repeat the gear change procedure to get into second.

The process of shifting from 2-3-4-5-6 is exactly the same as you increase speed.

A smooth upshift comes from the controlled and steady movement of the clutch lever and throttle work combined with quick, firm lifting of the shifter with the left foot. If you find the bike is jerky forward at shifts, then go back to the friction zone exercises above and continue the practice drills.

Here you can see the combined use of clutch and throttle:

When it is time to slow the bike down, we will need to downshift our gears to keep the engine and rear-wheel spin matched. As you initiate a slowdown, you will naturally need to roll off the throttle to help decelerate the bike.

When it is time to downshift, squeeze the clutch lever all the way in and firmly tap the shift lever down. Lastly, release the clutch in a slow and controlled motion. Change only one gear at a time and repeat the steps as needed to reduce to your desired speed, until you gain more experience.

For even smoother downshifting, you can roll on the throttle slightly (blip) as you release the clutch lever. This can match up the engine speed and rear wheel speed quicker.

False Neutral – A “false neutral” can happen when the gears do not properly engage with the transmission when shifting. The most common cause of a false neutral is failing to pull the clutch lever all the way in before changing gears with your foot. If this occurs, quickly pull the clutch lever ALL the way in and be firm with your foot on the shift lever. There may be some unpleasant clunks in the transmission as this happens which can be reduced by rev-match the engine (with a quick blip of the throttle) to the bike’s actual rear wheel speed.

Unable to reach shifter comfortably – All ADV bikes should be set up with proper ergonomics to match your body size. Be sure to adjust your shifter to meet your needs. 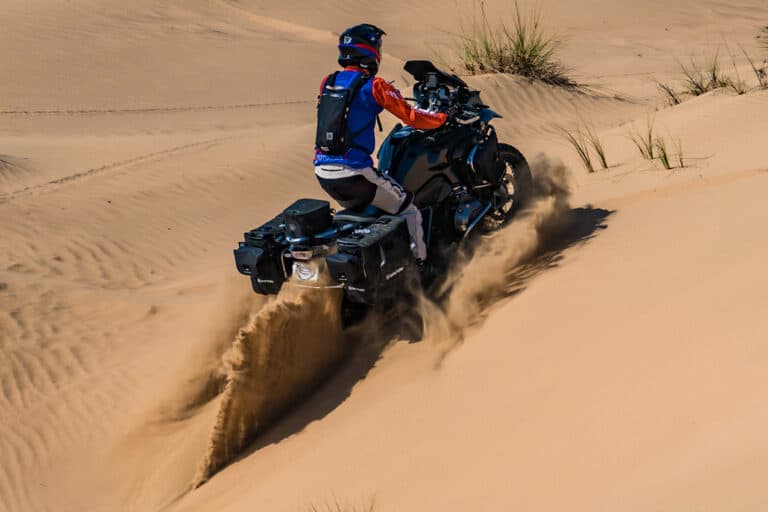 Riding in sand can be an intimidating experience for even the most seasoned riders. Tackling deep sand on a small dirt bike can be a challenge in its own right, but add an extra 110kg/250lbs and approximately 1,000cc’s to that mix and you can quickly see the challenge. This post will take a close look… 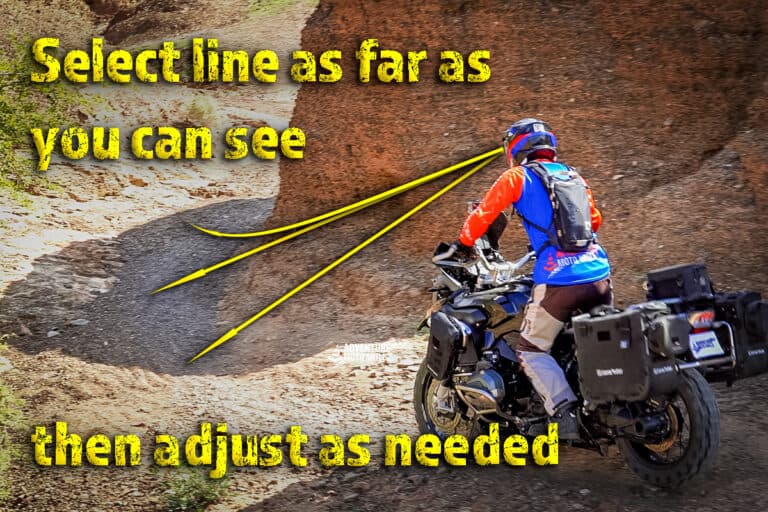 One of the most important aspects of motorcycle riding, whether on or off-road, is line selection. Simply put, this is the process of choosing the safest and most efficient path through an obstacle or terrain. This is especially important when riding off-road, as there are typically more obstacles and rougher terrain to navigate. Line selection… 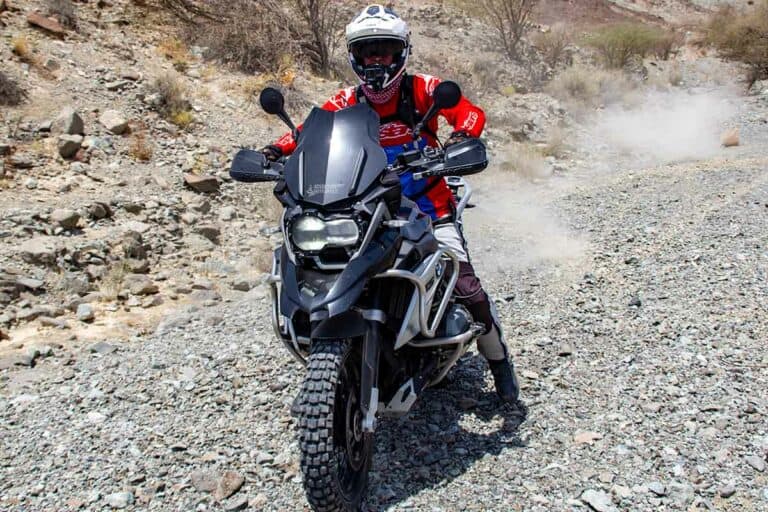 When it came time for me to switch over from road riding to off-road riding, I knew exactly what I needed: experience with gravel and hardpack roads. A second-hand BMW G650 Sertao got me started as I took off-road training courses and then practiced the drills constantly. Today, as a certified off-road instructor, I get… 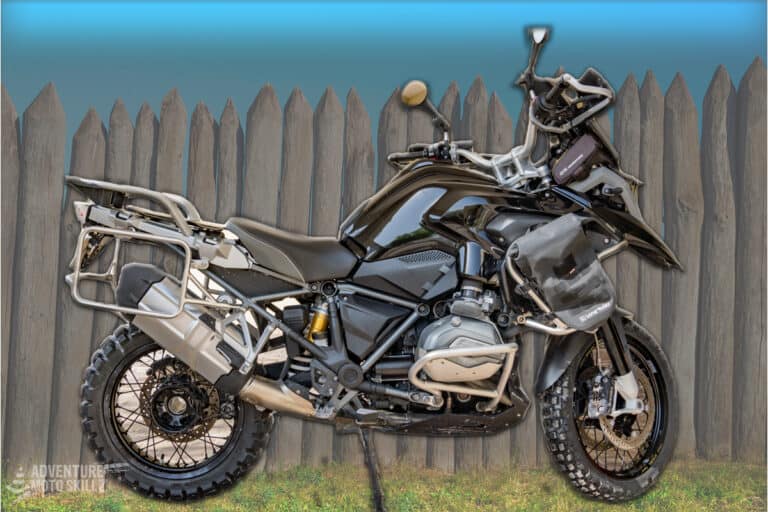 If you’re looking to improve your motorcycle skills, you don’t necessarily need a large training area. In fact, a small training space can still provide everything you need to develop your adventure motorcycle skills, with greater focus and purpose. All you need is a garage, a driveway, or a small vacant lot to fine-tune your… 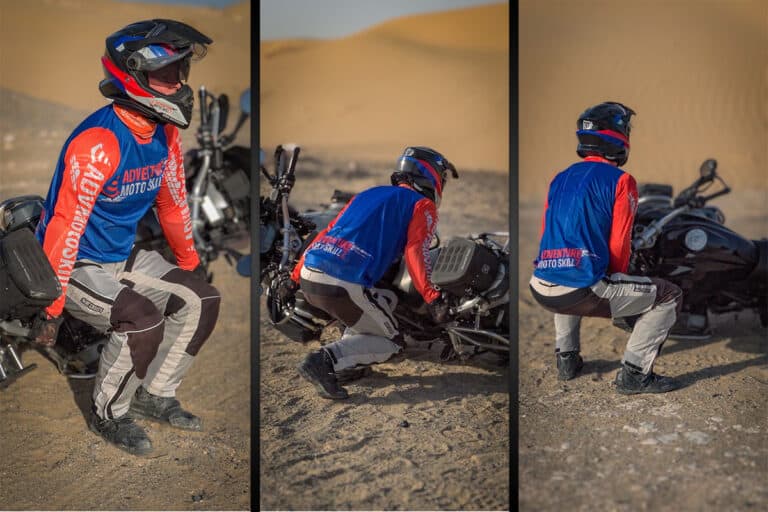 Bike lifts are like snowflakes … No two are exactly the same. Rocky trails, slippery mud, or loss of balance can send us down. So, having a few solo lift techniques in our adventure skillset can make all the difference. 3 Adventure Motorcycle Lift Techniques for Solo Riders Lift Type Benefits Precautions Back Facing Squat… 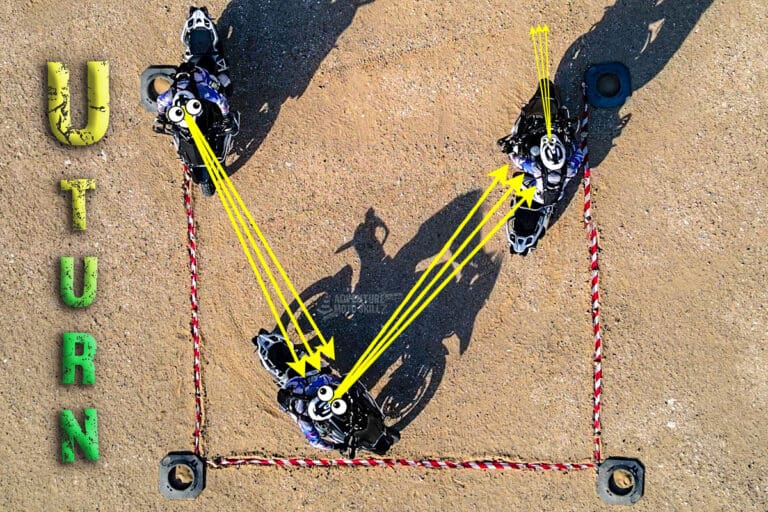 Anyone who has ridden an adventure motorcycle off-road knows that mastering the u-turn and figure 8 can be tricky. In this blog post, we will discuss 5 tips to help you dominate these maneuvers and have more fun on your next ride! Off-road u-turns and figure-8s on big ADV motorcycles can be learned, improved, and…